A Watershed Moment for Water on the California Westside

“Whiskey is for drinking; water is for fighting!” A quote often attributed to Mark Twain has rung true in California, a state famous for its “water wars,” for more than a century. Today, when reading about the water situation in California, you are likely to see the Westlands Water District mentioned. This is no surprise as it is the largest and by far the most powerful single water institution in California. Earlier this year critically overdrafted sub-basins in California were required to submit Groundwater Sustainability Plans (GSP) to the state, and the Westside (the subbasin the Westlands Water District lies within) is certainly one of the areas most affected by  the Sustainable Groundwater Management Act (SGMA). 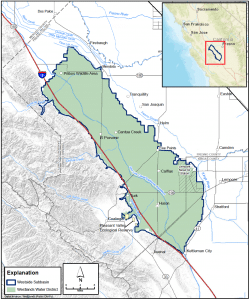 Also, on Feb. 19, President Trump signed a Record of Decision on a new federal Biological Opinion that is meant to update the biological science behind Endangered Species Act decisions from over a decade ago that greatly impact water deliveries to “South-of-Delta” water districts such as Westlands. In another development, the Westlands district on Feb. 28 entered into a permanent water contract with the U.S. Bureau of Reclamation securing water supplies long-term.

With groundwater allocations coming, surface water, which was already an issue of extreme importance, has become even more important. From 1999 to 2016, the Westlands Water District only once received its full allocation from the Central Valley Project. This in part has been due to the Environmental Protection Act and biological data taken in the Delta that restricts water deliveries. The Westlands has always been a political organization fighting for its right to receive its water allocation, and in 2016, it gained a good amount of political power in the federal government with the election of Trump to the presidency and Westlands allies to Congress, as well as subsequent appointments in the executive branch. The state government went to work on Senate Bill 1, a bill that would solidify environmental law to the day before Trump took office in 2017. This bill was eventually vetoed by Gov. Gavin Newsom, and negotiations have been taking place since on the best way to mitigate the situation with a balance between environmental protection in the Sacramento-San Joaquin Delta and deliveries of water to “South-of-Delta” districts. This changed in February, with President Trump signing a Record of Decision on updated biological opinions that would drastically help the Westside receive a greater allocation of its Central Valley Project contract allocation on a yearly basis. Immediately, the state government made it clear that it would sue the federal government to block this decision. This situation is ongoing, and a resolution is not likely to be reached in the immediate future. Even if the Westlands district receives more surface water deliveries, it is unlikely this will solve the problems the Westside is facing.To say it has been an important few months would be an understatement. But to understand completely how each of these recent events affect the district, which extends from Kettleman City on the south to Mendota on the north, we need to start with the water that lies beneath the ground — and the Sustainable Groundwater Management Act. Many of the farmers on the Westside rely on groundwater for a large portion of the water they use each year. From 2013 through 2015, the Westlands Water District used more than 600,000 acre-feet per year of groundwater, compared with just 366,329 acre-feet total of water from the Central Valley contract the district has with the U.S. Bureau of Reclamation, which is for more than 1 million acre-feet per year. More on why the surface water allocation from the Central Valley Project is rarely even close to fulfilled will be addressed later. The dependence on groundwater usage brings us back to the Groundwater Sustainability Plan submitted in January. This plan outlines pumping allocations and overall reductions in pumping for landowners starting in 2022, creating a dire situation for many who rely on groundwater. There are two paths forward for these landowners: either rely more heavily on surface water, or fallow acres and use the water on fewer acres.

The situation on the Westside is frightening any way you look at it, and no matter what resolution is reached on surface water allocations, fallowing of land will have to occur. This creates an issue for many farmers as, in order to comply with the Reclamation Reform Act, they can receive surface water for only 960 acres due to acreage limitations. To fallow acres in order to have enough water would be crippling for district farmers whose average farm size is 875 acres. Fortuitously, on Feb. 28, the Westlands Water District entered into a permanent water contract that will end the acreage limitations. This will likely lead to larger farms, allowing for fallowed acreage to be more easily absorbed. Also, this will allow pension funds, institutional investors, and publicly traded real estate investment trusts (REITs) to own farmland on the Westside and receive surface water from the Westlands Water District. That should drastically help stabilize the value of farmland in the area, which has been hit hard by the Sustainable Groundwater Management Act. It seems likely that unemployment will rise and the economy will struggle with SGMA on the Westside. However, with help from the federal government and increased investment activity, it is possible that these externalities of reduced groundwater will be mitigated. As an election that may shape the fate of the Westside nears, water will undoubtedly be the top issue in the region. Either way it goes, don’t expect the Westlands to go down without a fight; after all, “Whiskey is for drinking; water for fighting.” 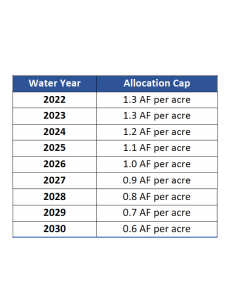