Typically, at the end of the year, I write a “wrap-up” of the growing season for the Midwestern states. However, this year, a notable guest writer, Scott Irwin from the University of Illinois, will assume that task and allow me to focus on a different subject.

It took me very little time to choose the topic of this commentary with the recent election in the United Kingdom and its implications on Brexit. While there are numerous reasons for the UK wanting to no longer be a part of the European Union, perhaps one of the most recited reasons is bringing regulating authority back from Brussels to the UK. One such area of regulation that Boris Johnson wishes to unshackle the UK from is the EU regulations with regard to the banning of genetically modified foods and their cultivation.

This past summer, as Boris Johnson was giving his first speech as the United Kingdom’s prime minister, he made it a point to bring up genetically modified organisms (GMOs), stating with force: “Let’s start now to liberate the U.K.’s extraordinary bioscience sector from antigenetic modification rules, and let’s develop the blight-resistant crops that will feed the world.”

The European Union has strict laws in place that essentially prohibit or make onerous the development and importation of genetically modified products. This includes a de facto moratorium on GMO approvals since 2001.

But while the topic of GMOs may be of economic importance to Johnson, where does science come down on the subject?

In the court of public opinion, the case against GMOs has been raging for years. The attorney for the defense is the scientific community, presenting evidence based on historical monitoring of GMO crops and their effects. The prosecuting anti-GMO community on the other hand has presented fear rather than evidence as its case, to the peril of consumers.

The scientific community, even the scientists in countries that are against GMOs, has led the charge in defending GMOs. Even the European Commission, a body usually skeptical of GMOs, conceded in its 2010 report, A Decade of EU-Funded GMO Research:

“The main conclusion to be drawn from the efforts of more than 130 research projects, covering a period of more than 25 years of research, and involving more than 500 independent research groups, is that biotechnology, and in particular GMOs, are not per se more risky than […] conventional plant breeding technologies.”

The EU-funded report has failed to change EU policies of the past decades, however, and thus created a topic for Johnson to rally around with the backing of the scientific community.

When I say that the anti-GMO community has waged its campaign to the peril of consumers, I mean it. As I say that, I do feel I should clarify who the consumer is: It is everyone — including impoverished communities around the world, some of which have high rates of blindness and death due to Vitamin A deficiency.

Golden rice is a genetically modified variety of rice created with the backing of the Bill and Melinda Gates Foundation to help feed and, more importantly, nourish impoverished areas with high rates of Vitamin A deficiency. It is estimated that lack of dietary Vitamin A kills 670,000 children under the age of 5 each year and causes 500,000 cases of irreversible childhood blindness. Golden rice has had an extremely tough road to approval in Australia, New Zealand, Canada and the U.S. with anti-GMO groups such as Greenpeace attempting to thwart its development at every turn, including destroying test plots of golden rice.

Development of this variety of rice is ongoing, and hopefully in the future this variety and other genetically modified crops — whether they are modified to be a fortified food or modified for harsh climates — will be able to help combat world hunger and malnutrition. Lifesaving GMO crops, while there is still resistance to them and some fear-mongering, are typically not as controversial as crops such as Bt corn, a corn that incorporates proteins toxic to insects. Bt corn has more critics than golden rice; however, in this case as well, the scientific community is still on the side of GMOs. 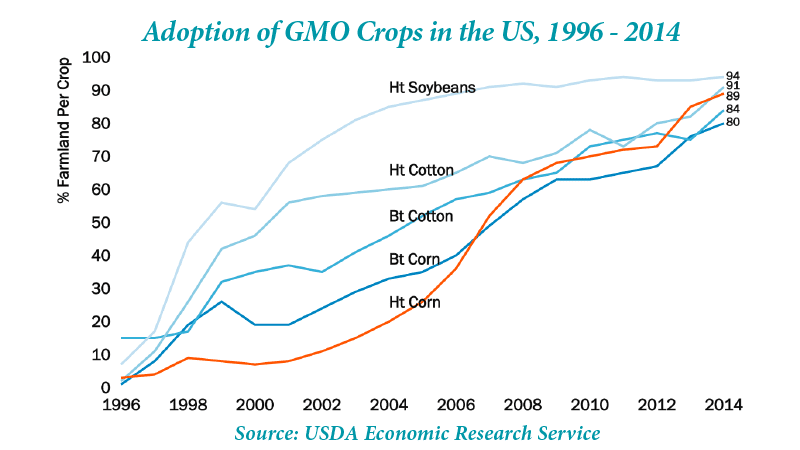 A study published in the Proceedings of the National Academy of Sciences in 2018 stated: “We show that widespread Bt field corn adoption is strongly associated with marked decreases in the number of recommended insecticidal applications, insecticides applied, and damage to vegetable crops in the United States.” The economic benefit to the farmer of GMO crops due to less insecticidal application and higher yields, as well as the benefit to the environment and climate due to less chemical pesticide use, is substantial and outweighs the anti-GMO arguments associated with GMOs that have little scientific backing.

Anti-GMO “experts” do provide a number of different arguments against the use of GMO’s providing a moving target for scientists. There are unproven claims that GMOs can awaken sleeper genes, mutate, or end up in unexpected places as stated on the Food and Agriculture Organization of the United Nation’s website with no sourcing or scientific backing. And, then there are other arguments that deal with the impact on the environment in which GMOs are used. However, as mentioned above, in many cases GMO crops are better for the environment due to the reduced use of insecticides and other chemicals.

When weighing these claims as well as any potential externalities it is very important to look at how big the benefit can be when a genetically modified variant of a crop is produced. Over the past few decades the citrus crop in Florida has been decimated by the Asian citrus psyllid and while crop scientists are experimenting with different types of pesticides, to effectively defeat citrus greening, it may be necessary to genetically modify variants of the citrus we love and make them incorporate elements that would be toxic to the Asian citrus psyllid or resistant to the greening disease.

As Johnson said, “… let’s develop the blight-resistant crops that will feed the world.” There is no arguing that the UK is not only an economic powerhouse, but also a scientific one. Allowing the cultivation of GM crops in the UK and unlocking the scientific potential of one of the most developed countries in the world can only help further the prosperity offered from GM crops. The potential impact in impoverished regions of the world as well as the potential economic impact in areas like Florida that have been affected by large infestations far outweighs any perceived negative impact GMOs may have.

I used the word “perceived” deliberately. When it comes to GMOs and consumers, perception has become reality. Misinformation and fear are the arguments for the prosecution in the case against GMOs by the anti-GMO community, and those arguments are working.

Two years ago, Hunt’s released a video of a tomato field with the text, “NO GMOs IN SIGHT.” Thankfully, in this case the farming and scientific communities were heard, and consumers found out that there was no such thing as a commercially available GMO tomato and that Hunt’s was advertising that its products were non-GMO in order to deceive consumers into assuming that Hunt’s competitors were using GMOs. The battle over the term “GMO” has become more of a marketing battle than a scientific one; as the scientific battle has been settled.

This marketing battle is being played out with mandatory labeling of GMO foods as well as countries banning GMO products. The consumer will continue to decide the victor, and as younger generations gain purchasing power, it is likely that they will have to take into consideration both sides of this argument.

The newest generations are more concerned with the details of their food source, its sustainability, and factors such as whether it is organic and fair-trade, but also what effect they perceive it has on climate change.

GMO foods fit many of the demands of younger generations as those foods:

Have a smaller impact on the climate due to lower usage rates of pesticides.

Are ensuring a fortified food supply for impoverished nations.

Are allowing for sustainable food supplies in areas of the world that previously couldn’t depend on a blight- and climate-resistant crop to produce consistent yields year in and year out.

Will future generations be able to reap the rewards of GMO crops, or will they end up scouring the tomatoes at the grocery store in order to avoid the nonexistent GMO tomato? I can only hope for the former.

Next post: Marina alongside Florida’s historic St. John’s River to be auctioned