“Past Thoughts” I Still Take Pride and Pleasure in Farming 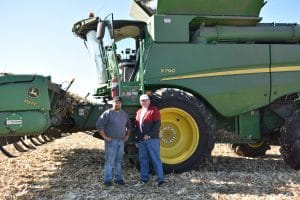 I grew up on a farm in Ontario and have always considered myself a farmer at heart. The commentary on the next page is one that I wrote in 1999. Reflecting back – what was true then, is still true now: I still take pride and pleasure in farming. This past year, my good friend John Dowson was kind enough to let me take control of one of his John Deere combines for an afternoon to harvest a few rows on one of my farms in Central Illinois. To say this was one of the highlights of 2020 for me would be quite the understatement. I have always loved the part of my job where I get to be on a farm, whether it is an almond orchard in California or Australia, an orange grove in Florida, or some of the best row crop farmland in the world – located within the “I” states (Illinois, Indiana, and Iowa). This is something that hasn’t changed and never will.

I have a friend whose father is an engineer with a large Midwestern manufacturer of heavy equipment. He is responsible for all aspects of plant maintenance for one of the company’s larger facilities: everything from plant protection to power production from setting machine lines to purchasing fire control equipment. This fellow, now approaching retirement, was raised on a farm and loved tinkering with the machinery. That enjoyment of machines led, in turn, to his academic pursuit of a degree in mechanical engineering. After graduating from Iowa State, he began his career with real, hands-on responsibility for making machines run, for making mechanical devices perform. And over time he was rewarded for his skill and commitment with promotions and greater responsibilities until he reached his present level of management. His department employs hundreds of people and his budget runs in the millions of dollars. Still, in an ironic twist, he’s not as happy as he was when he was working with wrenches and tinkering with wrecked machines. 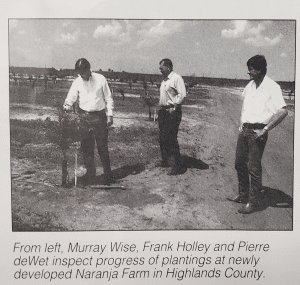 Now, I’m no engineer and God knows I’m happy doing what I do, but there some parallels in our two backgrounds on which I’ve been reflecting lately. I also grew up on a farm, but it was the growing, the nurturing of crops from the soil which fascinated me as opposed to the machinery. Iowa State was also in my career building plans as I enrolled at Ames to learn more about agriculture. After graduating, I farmed my own ground, worked with a division of Continental Grain, and became a partner in a traditional farm management and brokerage firm. Eventually, I founded Westchester Group and I’ve been gratified by the tremendous growth we’ve enjoyed over the past decade. And, frankly, most of you who know me also know the company and I have both prospered . . . not only financially but also in the sense that prosperity related to successful individual projects and outstanding returns on our clients’ investments. Still, when I think about the things I truly enjoy about the business of agriculture, it is often the simple, basic act of causing something to grow which comes to mind. In Florida we have developed and now manage thousands of acres of citrus trees . . . and I can’t just discuss the financial reports and challenges which need to be dealt with when I visit these groves. No, my background comes to the surface. When I can, I leave the meeting rooms and offices and walk the rows of beautiful fruit laden trees which I’ve had some hand in growing. I touch the foliage, cut open an orange, and smell the earth itself. I’m very proud of what we’ve done. . . of what we’ve grown.

I may have been successful in another career or maybe not, but despite the fact that fate has taken a long way from my production roots, I’m still enamored of the idea of farming. That’s why I brought this topic up. I’m proud that some part of me is still a farmer and I want all of you to know it.

Next post: Commentary: Farm Management More Important Than Ever Before

Previous post: Find the right partner for your land deal and you’ll have a positive experience that also delivers a great financial return.