The story of grain prices in 2019 largely revolved around demand weakness and weather problems here in the U.S. Corn Belt. The most prominent negative demand factor weighing on the markets was the trade war with China. There was some optimism through the winter and spring that a trade deal could be reached, and this helped support prices somewhat. However, these hopes were dashed in early May when talks were suddenly ended without a trade agreement and the two sides began raising tariffs again. As the accompanying chart shows, this development along with expectations for relatively large planted acreage for corn and soybeans pressured prices into mid-May.

At this point, something that had been brewing all spring caused a major rally in grain prices. The U.S. Corn Belt experienced an extremely wet spring planting season that really was just a continuation of record levels of precipitation that started the previous fall. Planting delays in the eastern Corn Belt were particularly severe, with Illinois not reaching 50% planting progress for corn until early June. Nothing like this had occurred in Illinois during the last 60 years. The widespread planting delays raised the prospect of both reduced planted acreage and reduced yields. December 2019 corn futures prices rallied to just under $4.75 per bushel by mid-June in the face of these U.S. supply concerns. 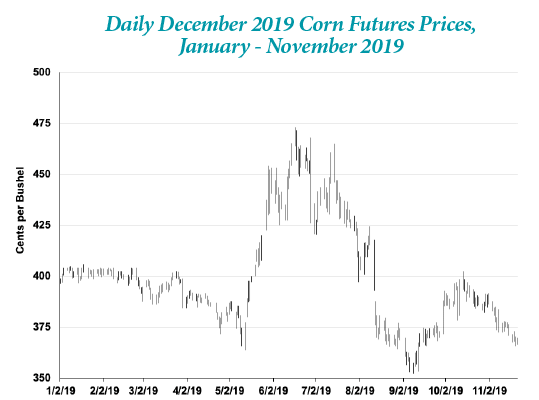 Subsequent USDA estimates showed that corn planted acreage did not decline as much as many expected. Farmers choose to maximize both planted corn acreage and insured prevent plant corn acres. While this resulted in a large reduction in soybean planted acreage, soybean stocks were so large that the reductions could be absorbed without much if any additional price pressure. Weather the remainder of the U.S. growing season also turned out to be reasonably good in many areas, and this lessened the potential negative impact of late planting on yields.

The end result was that both corn and soybean markets broke very hard after the release of the USDA August Crop Production report and have never really recovered. Unless weather this fall has reduced corn and soybean production more than currently expected, the prospect for significant recovery in grain prices in 2020 is not strong. 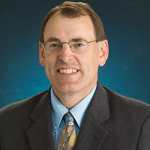 Dr. Scott H. Irwin is a national and international leader in the field of agricultural economics. His research on agricultural markets is widely-cited by other academic researchers and is in high demand among market participants, policymakers, and the media. He is best known for his work on the impact of speculation in commodity markets. Irwin has published numerous academic articles on the subject and has been called upon to provide testimony before the U.S. Congress, the OECD, and the CFTC, as well as publishing op-ed articles in the New York Times and Washington Times. He is also a well-known innovator in the development of agricultural extension programs that have helped hundreds of thousands of farmers in Illinois, the U.S. and throughout the world make more informed production, marketing, and financial decisions. His vision and leadership have been the driving force behind the award-winning farmdoc project at the University of Illinois since its inception in 1999. Irwin is a member of the Agricultural and Applied Economics Association (AAEA) and was named a Fellow in 2013, the highest honor bestowed by the Association. He has also received the Distinguished Group Extension Program Award (three times), the Quality of Communication Award, and Quality of Research Discovery Award from the AAEA.