A global pandemic and accompanying stimulus along with depressed interest rates have caused many investors to go searching for yield. Recently the Federal Reserve announced large banks (with more than $100M in total assets) would be prohibited from buying back stock in the fourth quarter and dividends would be capped and based on a formula tied to recent income. Many of the other sectors with long histories of paying dividends are in ruin such as the energy sector and other fixed income alternatives have been affected by historic lows in interest rates.

During this time, commodities have started to see a bull run of their own and cash rent negotiations for Central Illinois farmland have been steady. Goldman Sachs is forecasting a bull market for commodities in 2021 based on its outlook for a weaker dollar, inflation, and the prospect of further economic and fiscal stimulus.
To say 2020 has been an interesting year from an investing standpoint would be quite the understatement. The best performing assets have been stocks of companies that have benefited most from changes in overall behavior due to the pandemic as well as large amounts of fiscal stimulus and a loose monetary policy (e.g. tech stocks) most of which pay no dividends. Many retail investors may be scratching their heads as to where to look for yield. Contrarily, the privately held companies that handle investment management and wealth management for ultra-high net worth families known as “family offices” are well-positioned to take advantage of rising inflation and a weakening dollar. Institutional asset managers that invest on behalf of pension clients find themselves in the same position.

I have followed land sales in which a family office or institutional investor was the purchaser in Central Illinois and have noted a drastic increase in investment over the past five years with the amount of acres of Central Illinois farmland purchased by family offices increasing by 461% for the period of 2016-2020 compared to the period of 2008-2015. Institutional investors have also picked up the pace at which they are acquiring acreage in Illinois during this period, although their increased interest in farmland is not specific to Illinois with increased investment across a variety of geographic regions with Idaho seeing the biggest increase in purchased acres. Permanent crop investment has also been steady among this group with no drop off in acquisitions so far, even with the submission of groundwater sustainability plans in accordance with the Sustainable Ground Water Management Act in critically overdraft groundwater basins in California. (Read more about SGMA in our 2019 Q3 Newsletter “Drafts of Groundwater Sustainability Plans Taking Shape”.)

However, many of the regions that have been of the highest interest to institutional investors, mainly due to their higher return, have been of less interest to family offices primarily because the amount of capital expenditures and risk associated with permanent and specialty crop farms as well as other risks such as water accessibility. These are not concerns for farmland in Central Illinois with little need for irrigation, and the most common capex expenditure is adding drainage tile which if done properly should be a one time expense. This makes Illinois farmland an extremely predictable and consistent income producing asset with net-of-tax returns typically around 3%. This doesn’t include the appreciation of the asset itself which correlates negatively to inflation and makes it a great hedge for periods exactly such as this one where the dollar is poised to be weaker. For these reasons institutional investors and family offices have invested over $635,000,000 in farmland in just 16 counties in Illinois from 2015-2020. These counties make up the majority of the most productive counties in Illinois with great soils and climate as well as exceptional tenant bases. While they have seen a large portion of the investment by these funds, they are not the only areas of investment interest in Midwest row crops. Rather, they are the area I chose to focus on for this commentary as they provide a great base-line to measure investor interest in farmland due to these qualities.

This uptick in farmland acquisitions by investors has not necessarily been matched by an increase in land on the market or land sales in general. Many funds have chosen to either partner with farm management firms or regionally partner with farmers. Others have in house managers. Either way, the preferred method of acquiring farms has been to look for off market deals where industry contacts and local knowledge are the key. In fact, I received more calls this year from those looking to buy land than from those looking to sell land.

Farmland is considered a reliable and safe asset class, especially during times such as these because it has a low level of correlation to other asset classes. In March when the stock market was at its lows, the value of farmland remained relatively unchanged and all of our clients had just received cash rent checks in the mail not three weeks earlier. For investors with a sizable portfolio, farmland is a necessary asset class to provide stability and steady cash flow year in and year out. The Midwestern “I” states (Indiana, Illinois, and Iowa) are one of the best places to achieve these benefits and while most institutional funds are unable to invest in Iowa due to corporate ownership laws that limit the number of investors in a farmland owning entity to 25 individuals, typical family offices have the ability to invest in Iowa due to their limited number of clients.

Going forward I expect institutional and high net worth investment in farmland to continue to increase its pace due to the ability of the asset class to produce annual cash income at a yield that simply can’t be found anywhere else in the market currently without incurring much higher risk. So far, there hasn’t been any sign of this pace slowing down and with interest rates remaining low, impending fiscal stimulus, a weakening dollar, inflation, a commodity bull market, and continued loose monetary policy; investing in farmland just makes sense right now. 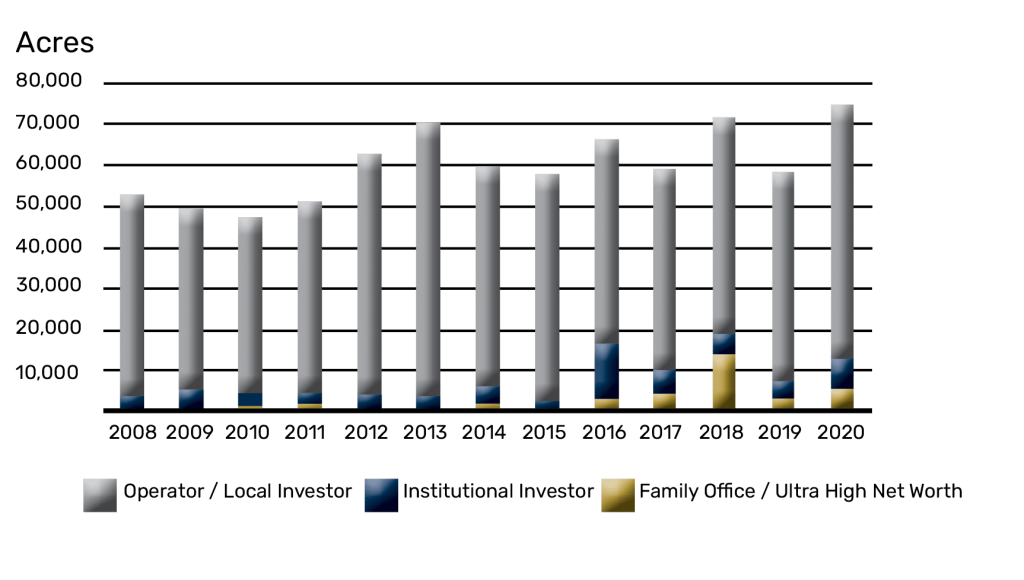 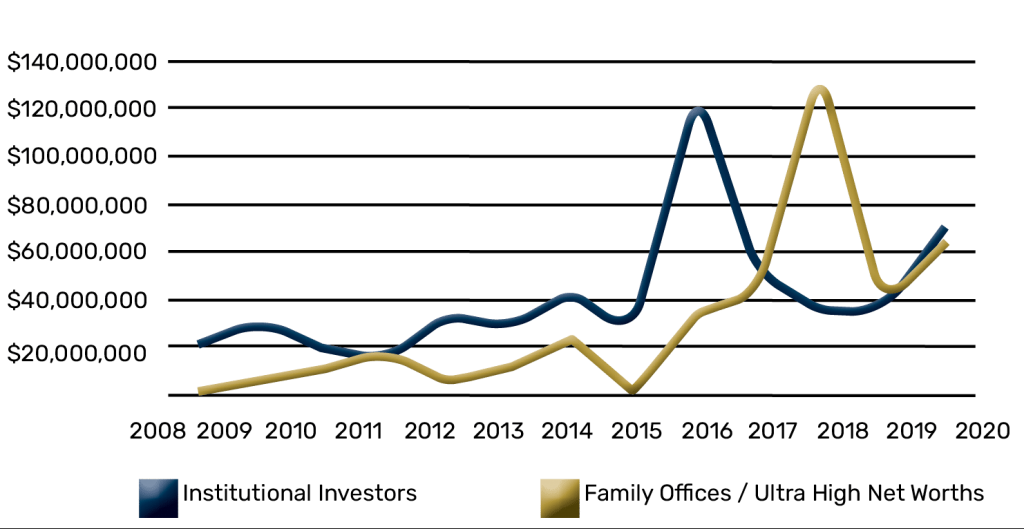